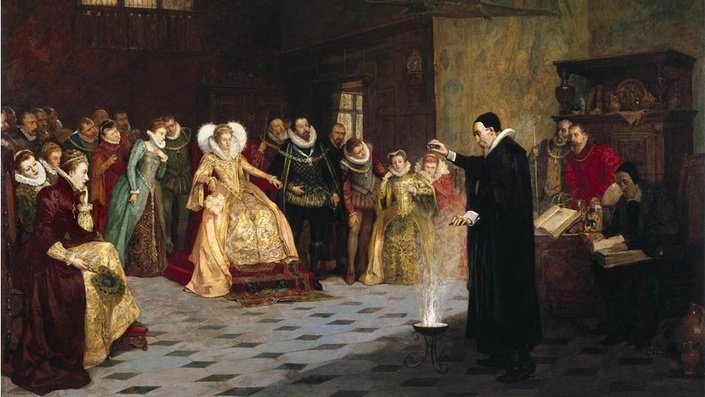 Explore John Dee and Edward Kelly's Enochian system and learn how and why to do occult work with the Aethyrs and Watchtowers.

This course is included in site-wide subscriber packages. You can sign up for a site subscription (half the price of this course individually!) right here.

Herein lie the keys of death and hell—the secrets of life, and the universe, and all that has been hidden from man.

Like you, I spent years searching for the true secrets of magick, often becoming disappointed when I came upon systems that promised results that they didn’t deliver, or that focused on incredibly shallow things. It wasn’t until I discovered Enochian that I knew I’d found the real deal. Magick that works to profoundly alter reality and consciousness in ways that are truly beyond belief.

For the first time, I’m now opening these secrets to my students.

In this experiential, hands-on course, we’ll explore John Dee and Edward Kelly's Enochian magick. We’ll learn how to call the Enochian Aethyrs. We’ll get technically precise on Enochian as well, exploring not only the methods of John Dee & Edward Kelly but also those as the Hermetic Order of the Golden Dawn, building a set of practical methods for performing Enochian magick. That means that you’ll walk away with everything you need to know to start doing Enochian on your own and exploring higher realms of reality.

I’ll also demonstrate how Enochian magick is performed by leading you through an actual consciousness-altering Enochian ritual. We’ll actually open up an Enochian Aethyr in class, so that you can get a first-hand experience of what Enochian actually is. That means that you’ll not only learn about magick, but you’ll actually be doing magick.

And what that all really means is that you’ll not only be ready to start exploring the most profound magical in the entire Western magical tradition after this class, but you’ll have actually done a lot of it by the end of the course.

Enochian magick might not be easy, but going through life in a state of confusion and un-enlightenment is a lot harder. And Enochian is the master key that can—bit by bit—turn the lights on, and show you what reality truly is.

Prior experience with magic is not necessary, just an open mind and sincere curiosity. I’ll see you in class!

NOTE: This is not the same class as the "Introduction to Angelic and Enochian Magick" class that was offered to the first readers of John Dee and the Empire of Angels. This is a 100% different and new class that focuses on the specific mechanics of the Enochian system itself, rather than the broader spectrum of angelic magic. You do not need to take the prior course to take this one.

When does the course start and finish?
The course starts now and never ends! It is a completely self-paced online course - you decide when you start and when you finish.
How long do I have access to the course?
How does lifetime access sound? After enrolling, you have unlimited access to this course for as long as you like - across any and all devices you own.
What if I am unhappy with the course?
We would never want you to be unhappy! If you are unsatisfied with your purchase, contact us in the first 30 days and we will give you a full refund.
off original price!